SEOUL, South Korea, Nov. 25, 2022 /PRNewswire/ — Seoul International Forum on Safety Income 2022 (hereinafter referred to as “Forum”) will be held in Seoul on December 6 (Tue) where guaranteed income experiment researchers of various countries gather to solve the global challenges of poverty and inequality. 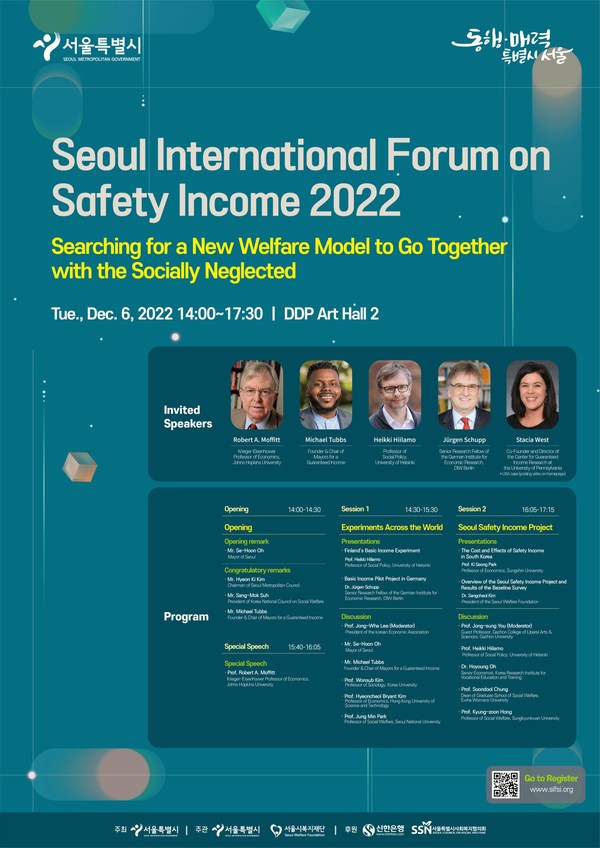 The prolonged COVID-19 pandemic and AI technology advancement have transformed the paradigm of jobs, making the lives of the vulnerable even more difficult. As such, many cities around the world are engaging in discussions on the need for a new income security policy.

Starting from Stockton in 2019, 100 cities in the US including LA and Chicago are currently pushing forward or planning guaranteed income experiments to eradicate poverty.

Under the theme of “searching for a new welfare model to go together with the socially neglected,” the Forum will begin with a keynote speech on “the need for income security” by Dr. Robert A. Moffitt, a professor of economics at Johns Hopkins University who is an expert in the research of poverty.

The keynote speech with be followed by discussions of guaranteed income experiment researchers of each country to share income experiments of the US, Finland and Germany, let alone Seoul Safety Income.

In order to eliminate welfare blind spots and alleviate income inequality, Seoul Metropolitan Government has been implementing a Korean-version of guaranteed income policy called “Safety Income Pilot Project.” In July, the first subsidy was granted to 500 households with low income and additional 1,100 households will be selected by 2023 to expand the scope of subsidies. Safety income will be provided for a total of 3 years (2022~2025).

Unlike basic income that is experimented overseas, safety income is distinguishable in that it applies differentiated subsidies according to the level of income. In other words, households with lower income will be receiving more subsidies.

This experiment intends to select households of approximately 2 folds as a control group and compare it with households subject to subsidies to verify its effectiveness.

A total of 1,600 households have been supported for 3 years (a comparative group of 3,200 households)

Furthermore, professor Heikki Hillamo (University of Helsinki) from Finland, professor Jurgen Schupp (senior research follow of the German Socio-Economic Panel Study) in charge of Germany’s basic income research, and professor Stacia West (Director of the Center for Guaranteed Income Research at the University of Pennsylvania) will be participating as presenters to share overseas examples.

With the initiation of this year’s Forum, Seoul Metropolitan Government plans on building a cooperative system for exchange and research with overseas cities, research societies and institutions, and launch the “Global Income Security Network” for continued discussions.

The Forum will be held from 2:00 p.m. to 6:00 p.m. (Korean time) on December 6 (Tue) and will be broadcasted online through Seoul City’s official Youtube account (www.youtube.com/c/seoullive) and webpage (www.sifsi.org).

Pre-registration begins on November 17 at the webpage(www.sifsi.org) and anyone interested in the Forum can participate.

The metaverse will change the way we perceive user data

Akeso Received First Tranche of US$300 Million Upfront Payment from Summit! Summit Is…

Buy or build? How to make the best decision in an economic…

Samsung’s Galaxy S23 may cost more than its predecessor

How China Destroying Its Tech Companies is Actually a Smart…